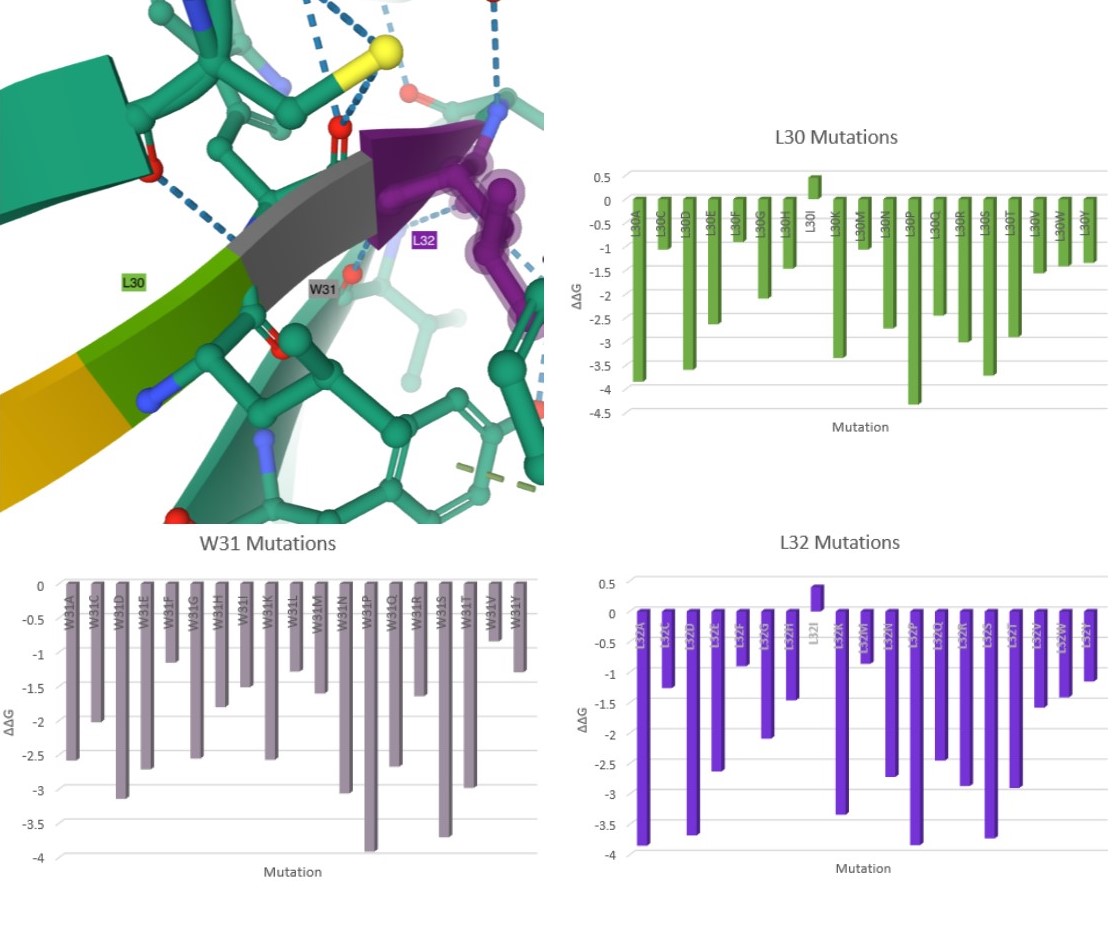 This past quarter (Spring 2020) has been an interesting one for sure. With the constant news of COVID and worldwide protests coming through every media outlet, focusing on schoolwork seemed like futile pursuit at times.

Thankfully, I was fortunate enough to have (mostly) fantastic professors that managed to provide informative and engaging lectures and assignments for the entirety of this challenging quarter.

A part of me is really enjoying working from home this quarter, and that part is mostly my GPA, which ended up being over an entire point higher than my unimpressive cumulative GPA. Not quite sure why or how that happened, but I guess I’ll just continue as I am…

One of the things that made this quarter special is the fact that I was able to take my schools Bioinformatics class, which I have been trying to get into for a couple years.

It was taught by one of my favorite professors (and now my advisor), is only taught once a year, and requires a manual override to register for. I was thrilled when I found out I scraped one of the last slots!

This class was a unique opportunity to collaborate with other STEM students (bioilogy/chemistry) as well as grad students and tackle a real world research problem with techniques and tools we learn in the first part of the quarter.

The first 4 weeks brought all the CS people up to speed on the basics of DNA transcription/translation, protein structure, and alignment concepts.

The latter half of the quarter was devoted to a collaborative research project, the groups for which we were allowed to self select out of a pool of pre approved project ideas.

The project I chose was this: Target various amino acids on the spike protein of the SARS-Cov-2, mutate them, and analyze the effectiveness of said mutations.

My role in the project mainly consisted of managing communications between us and our professor, as well as creating the pipeline for our data. In short, the pipeline worked like this:

I created a short bash script to automate this task. Although it could certainly be better optimized, I sacrificed some efficiency for readability by non linux nerds.

Most of this script is pretty self explanatory. I simply generate a list of proMute commands using proMuteBatch, and executed all of them.

I used clues from filenames and commands (such as protein name and residue number) to generate unique directories of every mutation ran by proMute.

The only “confusing” part would be the generation of the SDM script. In short, the script format for SDM requires the original residue type for the location that is being mutated.

proMute does not care about or output this information, so I had to do some fancy pipelining to get it to work.

I look into the PDB file for the target protein, and find isolate all the ATOM lines, that correspond to individual atoms in the protein.

I then isolate the residue number of interest, making sure we are looking at the correct chain in the PDB file.

The first atom of the residue is kept, and then we simply look at the residue it belongs to. I wasn’t sure about the PDB notation, because sometimes one amino acid would be represented by multiple similar 3-4 letter codes.

So I just chopped off anything after three characters, and then run the three letter name through my dictionary, which spits out the single letter amino acid code required by SDM.

The final step in the pipeline was a script created by an adjacent group studying double mutations in the same protein. This script analyzed the energy minimization data and used it to predict an effect on protein function.

Here are my favorite figures from our final paper. We used pymol to color and label the locations of interest, as well as illustrate their bonds and connections.

The colored bar charts on the right represent one mutation for each of the 19 bars. The data plotted is the output $$\Delta\Delta G$$ produced by SDM, where a negative value indicates reduced stability in the protein. 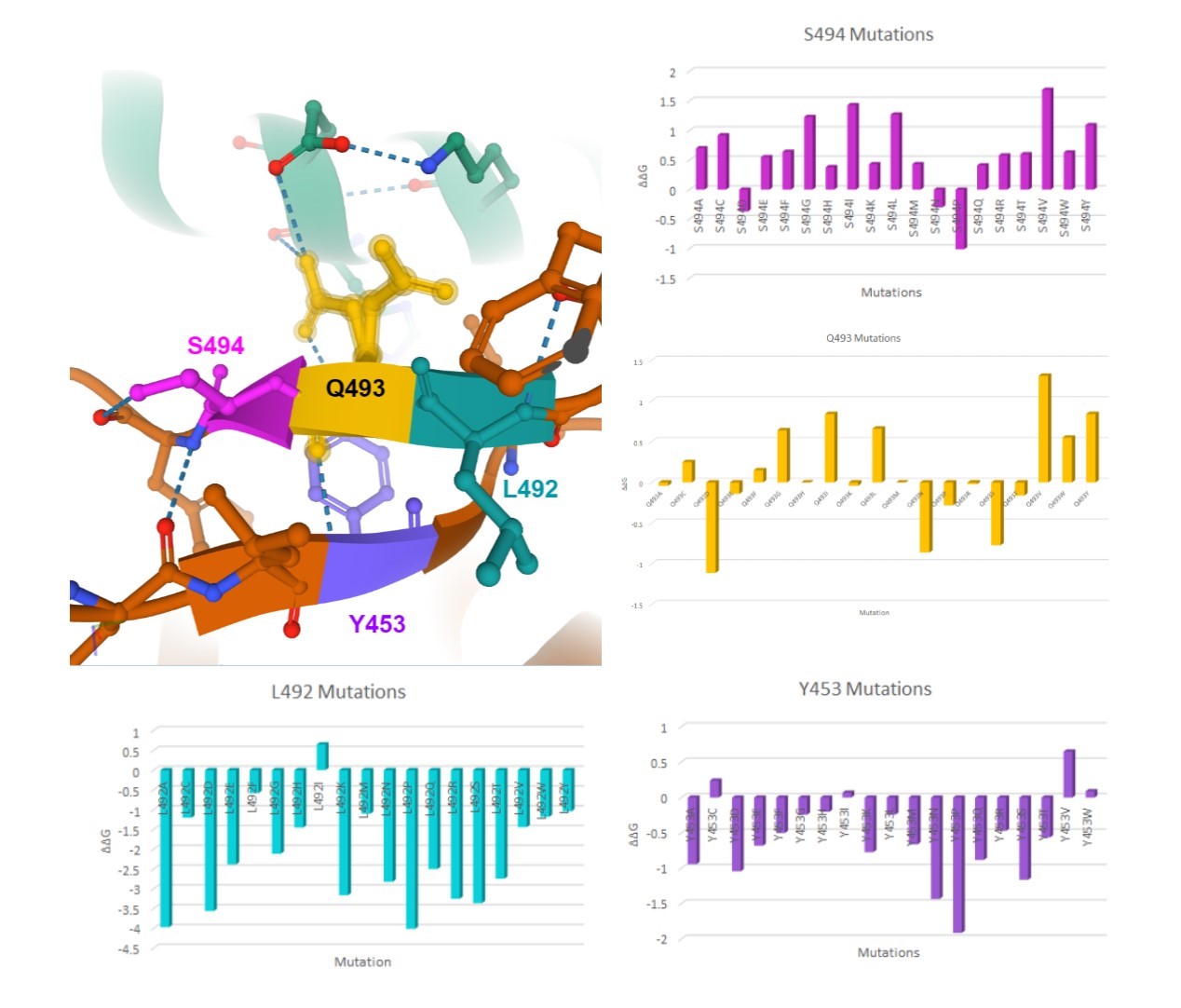 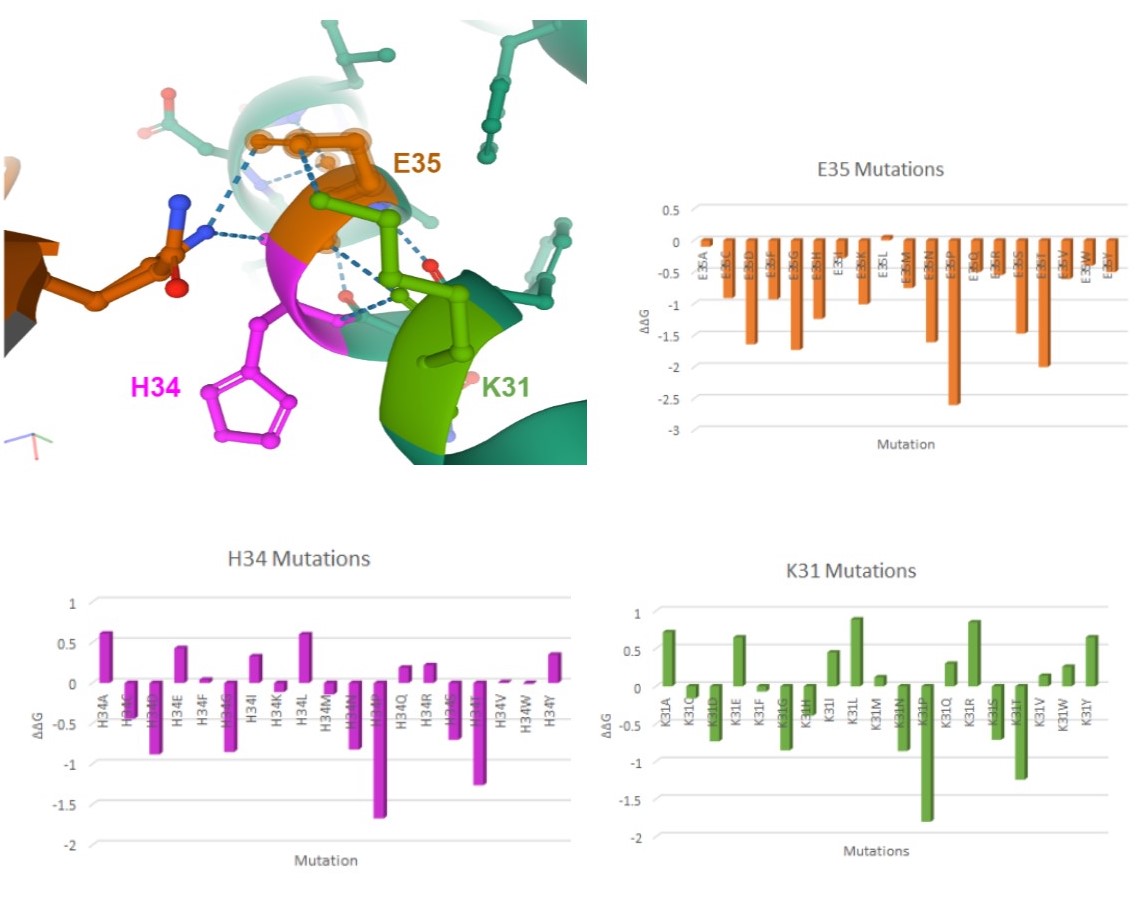 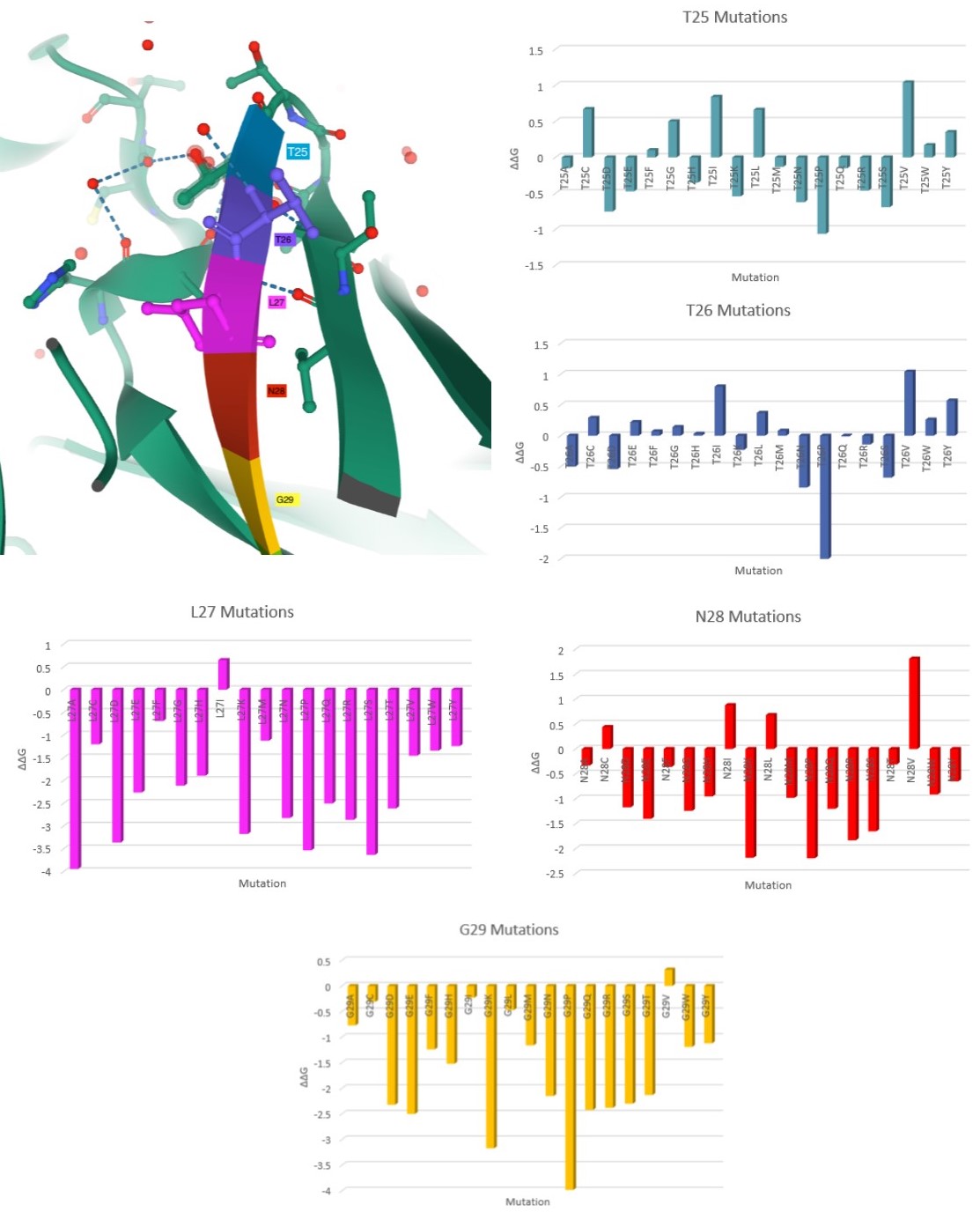 A heatmap visualization of the same data: 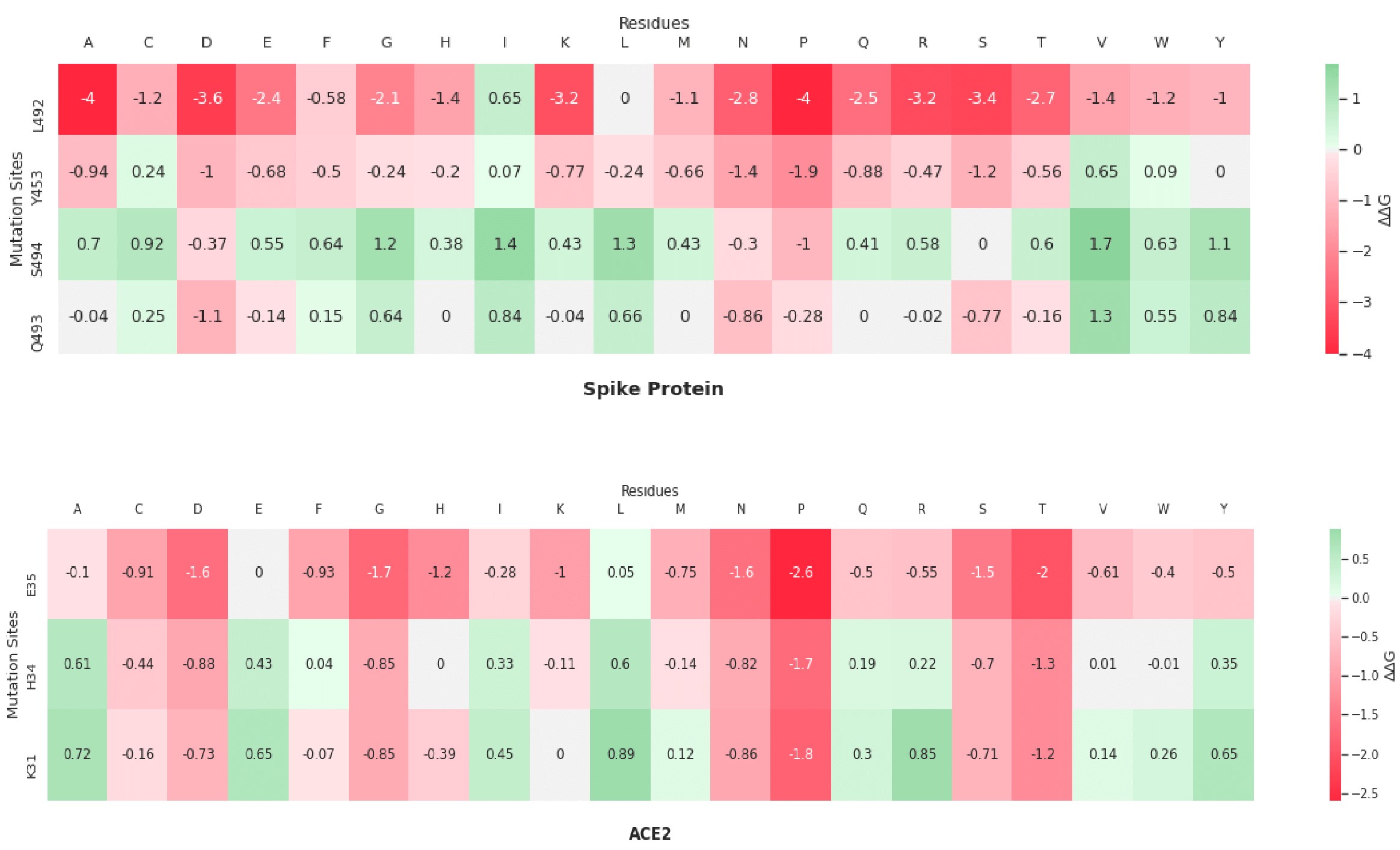 As you can see by the heatmaps, we were able to generate a significant amount of destabilizing mutations, especially on the 6Y2Estructure.

If anyone wants to read our final project, I’ll leave it here to download. At the last minute, we decided to combine the reports of group 4 and 5, who investigated single and double mutations respectively. This provides a good way to compare a variety of possible mutations of the same structure.

I had a really great time in this class, and could not have dreamed of creating a project of this caliber, and I could not have done it without my awesome group members and my professor who had the perfect “hands off” approach where he would happily provide guidance, but left large decisions up to the groups themselves.